There are several mutations and concepts that need more detailing, including things like physical and mental mutations, the poison factor, the use of the alternate missile chart, and the need for a new weapon class concerning the vibro devices.

Dealing with the physical chart the following additions should clear up some of the less logical parts of the rules: 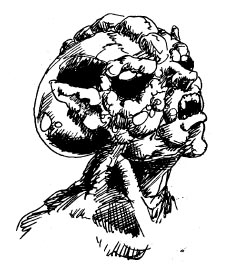 TALLER: In deciding how tall to make any given mutation simply roll a die for a 1-20 score and translate the number in terms of feet, adding five feet to the total. For every four feet or over its normal height, a mutant adds one die of striking damage, and for every eight feet subtract one point of striking potential.

SHORTER: In deciding how short to make any given mutation simply roll a die for a 1-20 score and translate the number in terms of inches and subtract from the normal height of the player or animal.

NEW BODY PARTS: These parts might also include a human head for a plant, a poison resistance gland (giving the mutation a resistance of 18), or suction pads on the arms of any given creature.

WINGS: This mutation will not work for any being weighing over 125 lbs. Concerning the mental chart the following should help those long suffering judges.

MENTAL PARALYSIS: This mutation has a range of 100 feet and the being affected gets a saving throw every melee turn until death.

PRECOGNITION: When mutants foresee their death, the shock to their nervous system is so great that the mutant instantly takes six hit points of damage. If only injury is seen, the mutant takes 1 hit point of damage.

TELEKINESIS: There is a range limitation of 50 feet for this power.

REPULSION FIELD GENERATION: When creating the sphere, mutants can mentally lift objects within; up to and including any weight they could normally lift by hand. These spheres of force can also be placed around the creator or be used to block openings.

MENTAL BLAST: These blasts have a maximum range of 100 feet.

LIFE LEECH: When points are leeched away and the leeching mutant takes damage, the hit points are first subtracted from those leeched first. While the mutant only gets to keep leeched points for 24 hours, these points never return to their owners. *** (Note this Brian and stop trying to kill my poor gorilla?)

DENSITY CONTROL (others): This power has a range of 100 feet.

MOLECULAR DISRUPTION: This mutation has a range of 100 feet.

DE-EVOLUTION: This mutation has a range of 100 feet.

DUAL BRAIN: This mutation allows two mental saving throws to be used for every mental attack, but triple the number of attacks is needed to raise a mutant’s mental resistance by a factor of one.

PLANT MOBILITY: For deciding how fast any given plant creature moves, roll a die for a score of 1-12 and translate the number into yards per melee turn.

PLANT SYMBIOTIC ATTACHMENT: As animal mutation number 44; not like it is written.

For any given poison it is only logical to assume that large concentrations in the body will disturb the system, no matter what the intensity, and/or the poison resistance. For the purposes of the game, assume that the second and further applications of any poison within one hour will reduce the being’s poison resistance by a factor of two for eight hours or until neutralized.

In using the alternate missile chart, the numbers represent targets having an armor class of seven and referees should add one number for every armored target above seven in each range.

The Vibro weapons should have a weapon class of their own and it reads as follows:

More information will certainly come from me and many others that play "MA" in the nature of rules clarifications and additions to increase the judging and playing pleasure of everyone. 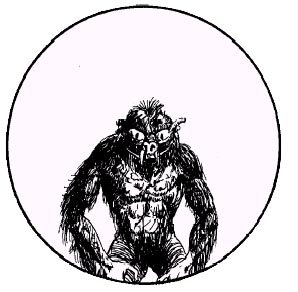